Back To All Blogs
What is Okay in Your Relationship?
By: Christy Aloisio
Addiction
March 19, 2015 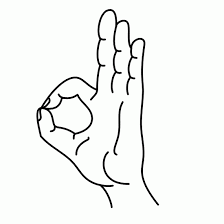 As we walk blissfully down the aisle of matrimony, we generally feel as though we have a firm sense of what actions and behaviors we could consider “okay” in our marriage versus those behaviors that we would deem as “not okay.”It is verily normal for newlyweds to feel that if their spouse cheated on them or became addicts of some sort that this behavior would not be tolerated. The spouse would set clear boundaries that the person would need to stop the affair or addiction and to ensure that it would not happen again. Unfortunately, as the years go by in the marriage it becomes far too easy to move our “okay” line. Slowly but surely behaviors that we felt that we would never tolerate become part of married life.

For example, imagine your spouse starts drinking too much. Slowly at first, binging on the weekend. You may say to yourself, “It’s okay, it is not happening that much.” The next thing you know your spouse starts to miss work due to his/her drinking. Again, you may rationalize why it is not such a big deal. Then the first DUI happens. Of course it causes pain and causes the spouse to think about their marriage and relationship, but so often there is no big change that occurs in the relationship. Yes the spouse is unhappy, but they are unable to set firm and strong boundaries. Then the inevitable comes and the person loses their job. The spouse has to think, “When I got married to him/her I never thought this would happen. I said I would never be married to an addict, but here I am.”

The issue often gets to a bad place because the idea of what is okay is pushed so slowly. It is not as though the spouse went from drinking very little to losing their job from drinking in a day. The spouse had the inability to stop the behavior or say they will not be in a relationship with someone who has that behavior when it seems minimal. But if you have a shift in thinking every time something happens to now make bingeing on the weekends “okay,”(and when I say okay that does not mean you are happy with it, but it being okay means you do not have a strong push to say the behavior will not happen in your relationship) then it is easier for your spouse oversleeping for work to not cause you as much pain or anguish.

So why do people change what they feel is okay in a relationship? Often it is the fear of abandonment; losing the relationship. They may also fear that they will be a failure if the relationship does not last long term. These fears can often be big enough that they overshadow what we really need or want in the relationship. The fear of abandonment is bigger than the need to not be married to an alcoholic. So much of this thought process is subconscious. We often are unable to see how much the fear of failure or being alone affects us. If you are in a marriage or relationship and you feel like as though things are happening that do not feel okay, it is time to evaluate why they have been happening for so long.